From the annals of Queen Nikki – 3 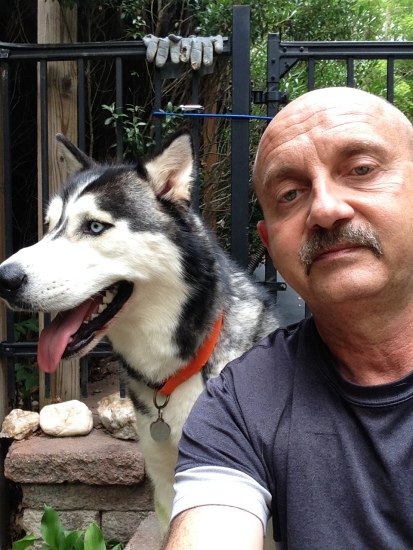 As we prepare for winter here in the palace there is much to do. Cut and stack a supply of firewood, close the swimming pool, power wash the deck, get the driveway sealed, and my least favorite…stain all the wood decks.

This weekend I tackled staining the decks. This is a laborious undertaking and to be quite frank the paintbrush and roller just don’t fit my hand. Physically yes, but mentally no. I hate painting in all forms, and then the cleanup is the cherry on the cake.

So, this morning I worked on the front deck. This deck looks down and out on a quarter acre of fenced in grass (Weeds and clover) that make up the stomping grounds for the queen and her loyal subject Mr. Cooper.

I was not in the best mood but I got busy because I’m running out of warm days. From my vantage point above the grounds I got to watch another episode of “Huskiness.” Yes, the drama between two huskies who don’t know how to paint any better than I do.

Typically, each morning begins with the distribution of frozen marrow bones. Each dog patiently awaiting these royal delicacies. It’s ritual that started with me trying to take a shower and drink at least one cup of coffee undisturbed.

You see when I get up I need some time and “QUIET” until I’m a functioning person. I don’t like to hear dogs throwing fits over anything. I like to ease into the day, not be forced into the middle of some hurricane uproar and the bones help. With the bones, I get at least 45 minutes of peace and quiet.

I guess after several months of this Queen Nikki discovered she was being hoodwinked, bamboozled, and how her royal highness was being made a fool of in front of all dogdom.

Once she discovered this, the amount of time of my tranquility has slowly being cut shorter each morning. You can dupe the Queen for a while, but eventually she sees through the plan.

Queen Nikki has practiced her Ninja skills and honed them to a fine edge. A process made easier by Cooper’s easy go attitude and lack of concentration. He knows the Queen would like to have his bone as well as hers. In fact, she would like to have every bone in all the kingdoms be under her control.

And even though Cooper knows all of this he sometimes blinks. His attention going elsewhere to some dog walkers or a cat cry.

In an instant, the Queen becomes a supersonic black and white cruise missile. She races forward with bone in mouth and snatches up his bone. Even with two bones in her mouth she releases this loud “Roooodle!” To let the whole block, know that she is still, “The Queen!”

I’m still amazed that this little mouth stuffed with two bones can achieve the volume of a marching band on steroids! The tone is that of a dying calf in a mud hole. I’m surprised animal control has not been by to check on complaints of animal cruelty.

To add to this is Mr. Cooper. He Roo-Roos constantly until I come out and save him from the Queen.

I run out to stop the noise…the noise of two dogs that sounds like a pack being boiled in oil.

I’ve talked of this before but today things changed. If you followed me you know I’ve said how huskies never stay the same for long. They think and they learn. Even Cooper who is not so fast in the brain department learns and adjust his plans. It just takes him a bit longer to solve a problem than Nikki.

Today was Coopers day. I had a seat in the balcony of my deck and got to see the whole episode.

Now, I’m staining the railing and not really happy about it. Nikki has buried one bone and stolen Coopers as an extra bonus. She is laying down there in front of him taking her time knowing on it.

Coop is not happy and begins his “Roo-Roo” speech. I told him to shut-up as I’d only had one cup of coffee. This he does and plops down with his head on his front paws eyeing the Queen.

I take notice because he actually did something I told him. But for once his brain is clicking and I was lucky enough to witness it.

He rolls around and plays like that bone really doesn’t matter to him. He’s looking around goes trotting off snooping the fence line and such. This bother’s the Queen because her fun of teasing has ended.

The Queen is momentarily off her guard at this new display or lack of attention to her and the bone.

So, Coop comes back and plops down, not seeming to care in the least about the bone she stole from him. Only 3 or 4 feet separate them as he gets up and does the husky stretch. First the front leg bow, and then the rear leg stretches.

Dumbfounded Nikki watches him with the bone between her front legs. He appears to not even notice as he appears to be just trotting by her.

With the reflexes of a cat he snatches up the bone from between her legs and goes into full after-burner. He is 50 yards away before she even realizes what had just happened!

I swear she was blowing smoke out of her nostrils when she went after him. The Queen was pissed off!

Her one subject had just duped her and was quickly vanishing with the bone!

I was laughing as she chased him all over the property. Now Coop is 20 pounds heavier but several inches taller with a huge stride. Whenever she got close he just exploded in a burst of speed that made her even more mad.

After several laps around the acre of ground both of them were exhausted. Coop dropped the bone and settled down for a nap. Nikki was tired as well and joined him.

No walk was needed this morning after that display of husky sprinting. Cooper was content that he’d outfoxed his tormentor.

I went back to work on the deck. Another chapter in the behavior of my dogs logged in my head.

They are quite the pair, and I’m happy I got to see Coopers revenge.

3 Comments on “From the annals of Queen Nikki – 3”