Zen of the Husky 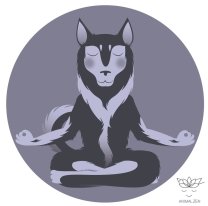 I’ve mentioned before that husky behaviors are not constant. Most people would expect that once the puppy has reached maturity that his/her personality is now set, and will remain that way for the life of the dog. My own experience with many breeds, led me to believe this was the normal way of dogdom.

Enter the Siberian Husky who has shown me once again that I need to throw out the book of common dogdom. Normal or expected doesn’t apply to the Siberians. At least not the ones I’ve known. In my dogs the puppy stage ended at 6 months. From 6-18 months was the adolescent teen-age type attitudes of testing, and trying out what they could get away with.

18-24 months the lessons had been learned if you bother to train them, and things would be stable for a while. At 24 months this seemed to be the turning point where most (not all) destructive chewing and silly behavior ended. It was like a switch was flipped in their brains, and I could tell they had reached a new level of understanding.

Their Siberian personalities were pretty stable at that point, and I thought this would be how they act for the rest of their lives give or take some minor changes. Not so… because the one thing I’ve learned is that huskies do not remain constant in their thinking. They continue to develop mentally, and each one has a few quirks that make them unique.

My example of this is Mr. Cooper. He turned 3 years of age this past December. Between 2 and 3 he had established a pretty stable personality. I was pretty confident on his abilities to pull and run hard. He was in fact a great teacher to my year younger girl. My best guess is Cooper and I have covered over 2000 miles in the last 3 years. Either by foot, bike, or cart. He’s never shirked a task and seemed to really enjoy just plain running no matter the reason.

In the last two months things began to change. I saw them coming because I pay attention to every detail about my dogs when we run. I can tell by their gait and body language if they are in good health. I can tell from the way they act, and how they look at me what the state of their mind is.

In Cooper’s case he has always gotten enough exercise. It is very apparent now, that this is not enough to keep him truly happy.

The tell-tale signs are finding him sleeping in his dog house more than usual. The look on his face shows some sadness in his eyes. He actually escaped by eating a hole in the weak spot in the fence. In three years he’s never escaped except by accident. But the most telling is during our recent runs.

At first it started as little things like losing focus and wanting to go after things that long since have been ignored. Next was ignoring commands to go the direction HE wanted to take, not mine. I could control these, but I’d never had to do it before. These continued to get worse even though controllable. Then the final one is during a run he would just slow down and come to a stop like he was exhausted.

I had no proof if he was exhausted, but I always gave him the benefit of the doubt and would stop for a rest break and water. Usually in a few minutes he would be good to go again. But this trait has continued to get worse.

I reached the point where I was pretty sure it wasn’t exhaustion but something else. The clues were all there but I wasn’t putting it together. Last night I proved for a fact what it is that’s bothering him. Its trail boredom, or in my case Urban boredom. It took 3 years and several thousand miles to do it but that’s what it is.

I proved it by testing him. Last night about a mile into the run he pulled up right after I wouldn’t go the way he wanted. It was cold and windy so it was not heat related. If he could go 5 miles before there was no way that 1 mile at normal speed he should be exhausted.

I turned the rig around and went back the way we came. I let him go the way he’d wanted and he took off like the wind, now that we were heading the way he wanted…everything was fine.

The solution for this is easy. I have to do more work by loading up the rig and dogs. Then find a new place for us to run. I think huskies run because that is how they get adventure. The mistake is to think that they love working. Just like us they work to get something they need. In our case we work to make money to get what we need.

Siberians work to get something they need. And that is a new adventure.

Why? Usually the clue to husky behaviors can be found in the history of the breed. For thousands of years dogs with the desire to travel were bred, and those that preferred to lay around were of no use and thus not bred. That’s how a breeds traits are developed and ingrained. Adventurous men needed adventurous dogs. The Siberian is the results of what they did.

This might be the reason so many people have trouble integrating them into urban life. It takes a lot of work to keep these dogs happy. The urban environment is not made for them, and it’s up to us owners to figure out how to meet their needs the best we can.

They are hard to undestand at times and even that takes some work.

It’s the way of the Husky.

2 Comments on “Zen of the Husky”