North by Northwest of Nome 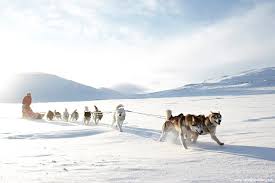 North by Northwest of Nome: A Poem

4 and 20 miles ago she fell upon the trail,
it didn’t matter all the times that she’d performed without fail.
You see the lives of dogs and men are subject to the wind,
They live, they love, they give their all, until they meet their end.

He left her buried in the snow, because he couldn’t stop,
that magnificent girl who gave her all, without a second thought.
Frozen tears upon his face as he drove the team on home,
Just a mere 100 miles… North by Northwest of Nome.

The meat they packed was life itself, for those huddled at home,
they kept on moving down the trail, North by Northwest of Nome.
Her sacrifice was not forgotten, by those that did survive,
when that team of huskies minus one… finally arrived.

She’d made their world a better place, with one step at a time,
men and dogs were all she’d known as she pulled upon that line.
Together they’d made a life, family and  some friends,
with no regrets she’d done her best, her trail had met its ends.

Life goes on because of her, and those who pull the sleds,
you can hear it in their songs at night, before they take their beds.
In a little village with no name, the people sing with dogs,
of life and death and sacrifice, by those furry demagogues.

Just North by Northwest of Nome.

← After the Gold Rush
The Siberian →