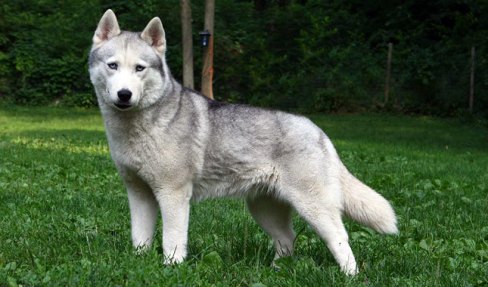 This post is geared more to the new husky owner, and it is important to be aware of some things for the good of both dog and family. Huskies are strong dogs, and with that also comes a strong will. Many people believe in rescuing huskies, and I have no problem with that at all… if you are aware of potential problems.

First of all, you have no idea how that husky was treated in his previous home. It’s quite possible, and even probable that he was mistreated. When people don’t understand something they eventually lose their cool and take it out on the source of the problem.

The rescue orginization may not be aware either. A dog put into a new environment will usually be reserved because they don’t understand the new place. This dog may act completely docile and fool everyone involved. The next thing to be aware of is that people lie. Neither you, or the rescue has anyway to prove the history given by the person giving up the dog.

People normally don’t give up a dog because its perfect. There is a reason they gave it up, and more than likely it is a behavior issue. Now some normal husky behaviors could be enough for a novice to give up. Things like constant exercise, digging holes, chewing and destroying furniture, and maybe even eating the cat.

And then there is the more extreme ones. Aggressive behavior that in fact can be very dangerous to a family. This behavior may not be shown until some particular trigger sets the dog off. This can be anything from food aggression to objects like a broom that was used to beat the dog.

I would also like to talk about how this aggressive behavior can be created without even a new owner knowing it. Now at the risk of being chastised I’m going to tell you just exactly what I believe.

First of all, huskies have a hierarchical pack structure (fact). This means that someone is at the top and someone is at the bottom. And the rest fall someplace in between. You can read all the Berkley papers that disagree you want, and you would be wrong to believe that load of crap.

Not only does the pack have a structure… the huskies, like us, have a desire to move up the chain. Not all, but most are driven to rule. You don’t have to have more than one dog to have a pack. Your family becomes a pack to a husky without much thought about it.

Now some people are stronger willed than others. Some are pacifist that believe everything can be reasoned and talked about until a solution is reached. That is fine if you are dealing with another human, but it’s not fine when dealing with a husky.

This is what can happen to a puppy. Huskies are known as being mouthy. That doesn’t mean talking, it means using their mouths as we would our fingers. Everything goes in a husky’s mouth. Puppies teeth, and they chew on things, fingers included.

What happens is the timid person lets them do this without a serious correction. The bite is annoying more than dangerous at this age. The problem is the dog will soon grow to the point where it can become dangerous if not corrected at that early age. It also empowers the husky to do as he pleases. You are slowly putting him in a position of power in your pack.

I’ve seen so many answers to this behavior that frankly, I don’t think have a prayer of working. Things like distract the dog with a toy, redirect them with positive training methods. So, what are you going to do? Spend 24 hours a day distracting this dog every time it wants to bite?  Every time it wants something?

What you are doing is allowing the behavior to continue. The dog was distracted sure, but he didn’t learn that putting teeth on human skin is not allowed. All you are doing is avoiding the problem. When that dog is grown you will have a real problem on your hands. By that time it has actally become a dangerous problem.

You cannot reason with a dog like a person. They do not understand your words, and even if they did, they don’t have the brain power to reason out what is fair/unfair etc. like a human being does.

You don’t have to Alpha roll the dog, but you have to instill that this behavior is not allowed. You have to instill in them you make the rules. Instead of yanking your hand back you can push your finger forward to the back of the mouth/throat like if you were sticking your finger down your own throat to vomit.

The gag reflex works just the same for dogs. A few times of this, and they soon learn that fingers are not something to chew on. This does not harm the dog anymore than it harms you, if you do it to yourself.

A rolled-up newspaper slapped against your hand with a very loud, “NO!” works wonders for many instances of bad behavior. The point being is you have to do something. Reasoning and being passive only lets the dog know it is in control of you, not the other way around. You’ve become lower in rank and that is not a good place to be as that dog matures.

A word to the wise no matter what kind of dog you rescue. Take what they tell you about the dog with a grain of salt. All they can tell you is what the person who gave the dog up said.