Tales from the Queen 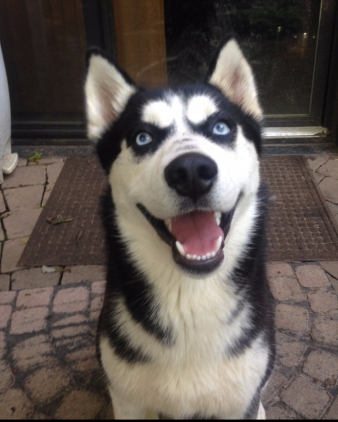 This is another chapter in the annals of Queen Nikki the 1st. A true story that has a lesson or two in husky behavior and training.

The most prized treat and possession of my dogs are marrow bones. They are cheap and sliced up beef bones full of the prized and fat heavy bone marrow. Bone marrow delivers 786 calories per 3.5 ounces. It’s very rich in fat which must be why it taste so good to them.

I keep them frozen and dish them out when I want a few hours of piece and quiet. Cooper and Nikki carry these prized bones to some part of the yard. Then they lay down facing each other from a few yards away to guard them until they begin to thaw.

When that happens, they spend a great deal of time knowing out that precious marrow. It’s not easy, they have to work at it like a Kong toy filled with peanut butter only harder. They also gnaw at the bones and since they are raw I don’t worry if they happen to eat a little of it.

The “Pro” side of this is they keep their teeth in excellent condition. On her yearly check, up the vet was amazed at how white and good the Queen’s teeth looked. The down side is given too much it puts on weight. Currently the Queen is a bit over weight. I’m not about to mention it to her… but I have started tracking her meals and cutting back on the fat.

A little fat is not bad on them in winter time. My dogs spend around 16 hours a day outside running around the property. They would stay out all the time, but I make them come in at night. Mainly because I’m worried someone might try to snatch the Queen and hold her for ransom.

Tonight’s episode of course revolves around a bone. I think it’s the equivalent of gold in our world. Its highly desired, fought over, and hoarded. A true treasure for the 4-legged members of the court.

The dogs came in early this evening and went to sleep right away. Around bed time for me I ran them out for a potty break. Cooper came back in a short while and the Queen wasn’t to be seen. I was reading a book so I let her stay out for another hour or so.

When I was ready to call it a night I yelled out the back door for her. Now, the Queen doesn’t always answer these calls. I mean after all she is a Queen in her mind. At times the demands of her staff are ignored.

After several tries at calling, I resigned myself to having to put on shoes, coat, find the flashlight and go out to retrieve her in my PJ’s. Now I have a gate not 20 feet from the back door that leads to the front yard. But the view is blocked by big bushes. I walk around the bushes and just on the other side of the gate I spy her curled up in a self-dug divot. A perfect little husky swirl, covered in black fur for camouflage.

I walk up to her and tell her it’s time to come in. She ignores me and hopes I’ll go away. This is interrupting my bed time plans and I’m not about to quit that easy. I give her butt a push with my foot which usually works to get her up and moving.

Not this time. She’s dead weight and not moving one bit.
When this happens with either one of them usually reaching down and starting to pick them up with my hands under the chest works. Not this time however and I received a menacing growl. Very seldom has she ever growled at me so I was a bit surprised.

In an instant I made my choice. I could have run to the house and got a toy to try and convince her to get up. I could have just ignored her and let her have her way. Or I could have tried using any of the worthless methods some folks would have you do, so that you don’t hurt the dogs’ feelings.

Instead I just ignored her and picked her up off the ground anyway. Sure, I risked a bite, but it wouldn’t have mattered. Sometimes you have to risk it to stay in control of these strong-willed dogs. I wasn’t mad, I wasn’t mean or rough but I made it known that she was going to get up.

Once on her feet she snatched something from her little hole in the ground. Yes, you guessed it. One of those bones she loves so much. She was guarding it from Cooper or anyone else that might have found it during the night.

I reached for it in her mouth and she gave it up without a growl. She followed me to the back door and in we went. It was all caked with dirt from being buried so I washed it off and gave it back to her. She immediately wanted to take it back outside.

That wasn’t going to happen so I told her I’d put it in the freezer for safe keeping. She watched me do it and was satisfied it was safe. Then she went to her little bed and after 6 twirls curled up and the incident was over.

No pain, no tricks, just a lesson for the Queen that she can’t always have her way.

The morale of this story is that you have to understand your dog(s). A husky depending on its personality can take over if you let them. I really wasn’t too worried about being bitten because we’ve done this once or twice before over different issues.

It started during puppy days, and the Queen has a very strong drive and personality. She learned early that sometimes I was going to win. That lesson stayed with her at some level. She didn’t bite because she believed I was going to take it no matter what.

That doesn’t mean she is going to give up testing me. She’s a husky and one with her own plans about how our pack should be run. Tonight, she got another update in pack hierarchy.

She doesn’t hold it against me. She just went to bed and it’s a done deal until next time she feels the urge to test the boundaries of her world. I let her do husky stuff that really doesn’t matter to me. She can rule the other dogs if she wants but there are limits I impose when needed. Its completely fair and they accept discipline if its handled correctly.

And that means fairly, consistently, and without anger on my part. If your going to lead the pack, that is the correct way to do it. Understand your dogs needs and what drives them. They have simple wants but they are very important to them. So, use your big brain and not your frustrated feelings when the issues show up.

You will have a much better relationship, that both you and your dog will enjoy.