Beyond the Rainbow bridge: 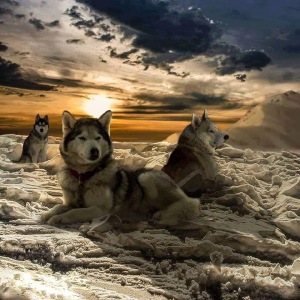 Jake was born unto the world of man in Mankato Minnesota. The barn was full of strange sounds and smells. He didn’t really know what he was or how he’d come to be.

He just knew the warmth of his mother and his siblings. He suckled her warm milk after fighting with his siblings. It was his first lesson in the struggles of life. He couldn’t hear and he couldn’t see those first couple of weeks, but he fought for milk and his body began to grow stronger each day.

When his eyes opened he saw a bleary new world. A world that would quickly come into sharp focus. He found the huge humans to be kind and mean at the same time. He had no idea what they were and why they were so different. But his mother seemed to love the humans, and sometimes when they held him something stirred deep inside of him.

It was some whisper in his mind from long ago that he didn’t quite understand. He didn’t understand exactly why his mother seemed to care about these big creatures. But always there was something inside him that said you should try your best to please them.

At six weeks old he was eating well and mom had kicked him away when he tried to suckle. He missed her belly warmth and the feelings he was safe. She looked at him with big blue eyes and licked his furry coat.

“It’s time for you to move on. I love you my only son as no one else can know. It’s your time to move along. Do what huskies do.”

“What do huskies do?” he asked.
“What we’ve always done,” was her reply.

Jake was confused but did his best with the little knowledge he had. It was hard because life was all about play and learning about all the things his body could do. He found he was fast in the run, agile, and smarter that the other animals on the farm.

Then one day he was given to some people he didn’t know. He left with them, his family broken up. But he was brave from deep inside. He’d found the core of husky lore even if it was only a whisper in his mind.

The humans loved him, but they could not understand what he craved. His need to run and work and do his very best. He tried to tell them one day by eating up the couch. He spread it all around the room and watched them lose their minds.

They could not understand how someone so beautiful could have such an evil streak. His punishment was soon to show. Jake was tied in the back yard with nowhere else to go. His days were long and lonely, the solitude more than he could bear.

So, one day he chewed off his collar and climbed the privacy fence. Free at last he made a blast not knowing where to go. He ran so hard his muscles ached but it felt so good to run. He realized no matter what hurt this what he loved!

It all ended to soon when he crossed one more street.

That bumper chrome and hard, had hit him square, and threw him through the air. He crashed upon a cement wall and rolled into the street. His sight grew dim and with ragged breath he took his final breaths. Jake closed his eyes and felt regret. He’d never had the chance to understand this world. He died right there and no one cared upon that empty street.

Jake awoke upon clouds of mist as he rose his tired bones. Then he saw a line of ragged dogs headed for a bridge. He struggled up to follow them his pain was very great. But something deep inside said he must make it to that gate. Some in line looked really fine, they pranced and hoped about.

But most were just like him, in pain and full of sorrow. But all of them formed a line and crossed the gilded bridge. Their they waited patiently to tell their stories of life. To plead their case of why they should be admitted to the lands of glory.

As Jake approached he heard the stories of each and every dog. The tales were sad except a few who had lived a perfect life. Jake had no story, only pain and wanted it to end.

At last Jake stood before the giant gate his head and tail hung low. A voice boomed soft and sweet inside his head, “Welcome young Jake” it said, “Tell me your life story.”

Jake raised his snout and looked upon the voice. He was a huge Saint Bernard with brown floppy ears, his soft brown eyes filled with tears from all the fears and stories of this line.

“It’s okay little one, and you can call me Peter. I have to hear your story of life before I can let you enter.”

Jake looked at the great big gate with a husky on each side. He looked at Peter and told his tale from deep inside his heart. “I’ve done my time with mankind, and I think that I’ve had enough.”

Peter’s eyes laughed back at him and with a big smile, the voice boomed inside his head, “It’s your first time little one, and you’ve done nothing wrong.”

Jake was sad and his body hurt and he’d almost lost all hope. But somewhere deep inside a whispered voice called out. “We never quit and its been that way for all time.” It was followed by the howling of a pack inside his head.

The knowledge of a million souls who’d come before his time.

Jake looked up into Peter’s big brown eyes and asked, “What’s to become of me?”

“If you like you’ll live a life, a million times over. And if you don’t you are welcome to stay here forever.”

Jake followed Peter past the gates and entered into winter. The wind was fierce with blowing snow, and no signs of cover. The pines were swaying with the wind and the mountains went on forever. His body healed and he felt no pain as he transformed into the adult he’d never been. Beautiful and strong, as he’d never had a chance to discover.

Jake raced around the blowing drifts and others came and joined. They welcomed young Jake to the place where huskies go. Frolicking and biting legs amid the blowing snow.

Peter waited patiently beside the big gate. He knew young Jake was new, and for some… the time it takes to learn what they are.

When at last the games were over young Jake sauntered over, “He’d healed all up and found his home amid those frozen waste.

“Peter, can I stay here forever?”
“Of course, you can but is that what you truly want?”

Jake looked around and sniffed the wind, this place was all so perfect.

But deep inside a voice awoke inside his head and told him of the pact. “Man, and dogs it’s always been, they need us to learn. The hope of man lives inside your furry coat young Jake. The trail is hard and you must do your very best, for that’s what Huskies do.”

Jake’s heart felt like it would explode out through his chest. His job was to help all those below the icy clouds. To give his love unconditionally, come rain, or snow, or thunder. He might suffer but then again, he might get that life he’d heard about. Man, and dogs fighting through the storms of life, one heart with another.

Jake looked over at St. Peter and told him with full conviction, “I’ll go back and try again, I think I can do better.”

St. Peter smiled and walked away, looking back over his shoulder.

“I knew you would my little friend, of this I had no doubt. I’ll call you soon because the time is very short. They need your heart and knowledge too… maybe even you can save a few. For that’s what you huskies do.”

Jake looked around and then raced around as fast as his feet could fly. He would enjoy his time before he left these frozen skies. He’d go below and spread his love the best that he could muster.

“Maybe next time I’ll get a musher!” he thought, as played with all the others.

A native girl he was bonded to under the northern lights. Peter smiled down at the beauty of two young hearts as they grew up together. For 15 years they never were apart before he did return… beyond that rainbow bridge. But he’d left the world a better place. A young woman would never forget their last race.

Voices speak upon the winds, howling in the night, stories of love and sacrifice heard by just a few.

The Huskies hear it loud and clear…because that’s what huskies do.