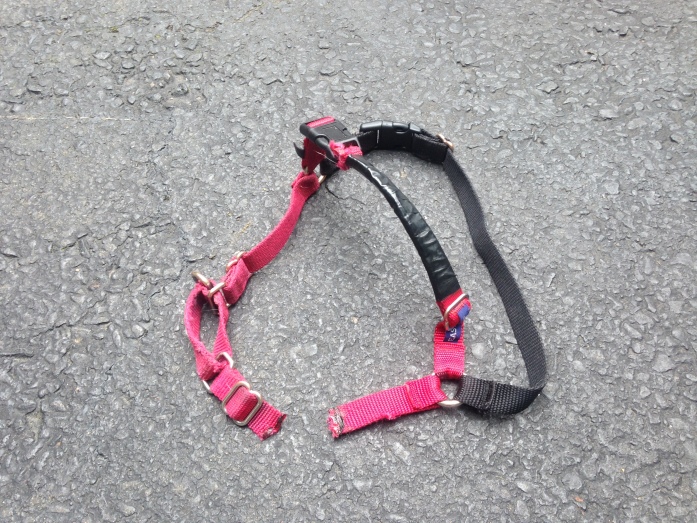 When you have a husky or three like I do… every day is an adventure. Just when you think you have it all figured out, Murphy and his law show up to remind you how little you know about how the universe works.

This morning I got up a bit later than normal because I was teleworking. 06:00 instead of 04:30. This gave me plenty of time to take Cooper and Stinky on a walk. All was going well, getting them into their harness, and soon we headed out. I was be-bopping along enjoying the cooler air. I had no idea that all hell was about to break loose.

Not having gone far, Stinky got her lead tangled and decided to pull like a tractor. Her old worn out easy-walk harness broke, and became tangled around her rear legs.

I tried to grab her, and wrap the leash around her neck. The Queen was not having any of this non-sense from a servant and went full born bucking bronco and busted loose. While I was wrestling with the Queen, Cooper yanked the leash out of my hand and went trotting up the block free as a bird.

Suddenly I was on my knees with no dogs and one broken harness and leash! The Gods were definitely not smiling down on me that morning. I suppose I committed some infraction in the eyes of the Devine husky God, and in so doing was to be punished appropriately.

Keep in mind this all happened at the worst possible location. Which was in front of a neighbor who owns two Mastiffs, and believes they should not be fenced or tied…because they are special.

Okay back to the story. So, I’m standing there with this leash and broken harness. I yell at Cooper to come back, and to my surprise he comes trotting back down the block to me. That gives me a small sense of hope that I can recover my dogs.

Nikki (Or Stinky I call her) came running up at Zoomie speed. She was happy as a clam to jump on Cooper’s face with both paws and say, “I’m Free…I’m free!” I made a desperate lunge to snatch her majesty and she bolted.

Actually, this is a very dangerous situation I’m in. Nikki is 11 months old and running free. Not the least bit afraid of cars, dogs, people, or much else.

She runs right up to the back yard of the mastiffs, and I’m expecting to hear a dog being killed as I call her. Cooper is being good and has the wisdom to realize that I’m not happy at what’s going on.

Chasing a loose husky is a fool’s game unless you suddenly have four legs and world-class sprinter muscles. I can’t catch Nikki so I start walking back the way I came…calling her. I had to be an actor and play like she was being left behind.

The black and white tornado comes flying after us but not close enough for me to loop her with a leash. I have no choice but to continue on, and call her to follow. This she does… but not without going to every back yard, the woods, and everywhere else to investigate her freedom.

At this point, the whole neighborhood full of dogs that are in an uproar caused by Stinky invading their sacred lands. Incensed that a black and white Queen runs free on their property, and they cannot repel the brazen invader.

I’m sweating like a pig, and hoping she doesn’t get killed, or decide to run off through the woods never to be seen again! Sweat trickles down the sides of my neck from nerves not heat. Now in most cases like this I would have got on my cell phone and called the wife to come help.

Guess what? That’s right, this was the morning I had to forget it on the kitchen counter! Murphy was giving me a long lesson in how his laws can multiple into a disaster! Something I’ve never forgotten again is my phone.

I have no choice but to continue on calling her as me and Cooper head for home. Nikki disappears behind a house and I hear another dog barking.  From 30 yards, away, I try and convince her to leave that dog in the fence but she isn’t listening to me. Just then the neighbor opens her door to let her dog out for a morning squirt. No leash of course because her dog is special as well.

Nikki goes to meet this new dog and scares the crap out of it. I hear sounds like a dog being killed. I can’t see because of the bushes. When I can see the woman in her pajama’s looking shocked at me and the mad Queen I notice that it’s a little dog who came out to pee and found a Husky instead!

I’m running down to her front porch with Cooper in tow and yelling, hoping that Nikki is not trying to kill this dog, or vice versa.

Fortunately, when I get to the woman in the robe at the front door, no one is being killed even though both dogs are making enough noise to make the whole neighborhood think that.

I tell the woman to grab Stinky for me and toss her the leash. Stinky is so happy to have some new friends that she gets a lasso around her neck without incident. Except now I’m fighting with Cooper because all the dog screaming has got him worked up. He has decided enough and he wants to play or eat all dogs in the general area!

The woman passes me the leash with the corralled Queen Nikki. I head for the street with two worked up Huskies wanting to pull my arms off. I thank her when we reach the street, and off we go for home.

All of this happened within 10 minutes of starting our walk. I only had one cup of coffee, and got thrown into this mess.

I swear it was not the best way to start the day.

But in the end, nobody was hurt, and I didn’t lose my dogs. Huskies sometimes get loose, and they are long gone. At least Cooper came back to me when I called him. That may not seem like a big deal to most of you. But for a Husky that is pretty amazing and I’m so glad he did.

Remember to expect the unexpected! For it will strike when you least expect it.

The moral of this story is: “Check your equipment every day!

Lessons from life with a husky.

← Sammie…Master of Escape!
For the Love of a Dog →