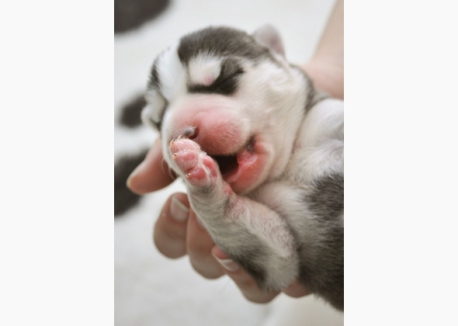 I was inspired when I saw this picture of my friend’s new baby husky. A whole lot of things boiled up in my head about this new little life.

I’ve been down this road before, having raised two pups in the last two years. Just like having children I took the lessons I learned from the first baby, and it made the second one much easier. Just like any new parent I made mistakes, and tried to learn from them.

There is so much at stake with a new life under your care. It’s even more difficult with a husky because you are not of the same race, you don’t speak the same language, and you might not even understand what a husky is.

Like all animals Huskies have instincts that drive them more than reasoning ability. Thousands of years of DNA is hardwired into them. How else would a first-time mom know how to take care of the young during birth?

A husky will reach the mental capacity of a two-year-old human at best…and be armed with fang & claw and a pro athlete’s abilities. They truly are an empty cup waiting to be filled. What you do in that first year is critical to the tone you set for your new husky as they grow and learn to adapt into our world.

Potential, your husky has so much potential. They can be a positive member or a negative member of your pack (Family) Do the work that first year, and your life will be so much easier the next year and from there on.

You are the leader; it is your job to figure out this dog you brought home. You have the big brain that the husky does not. He is instinctual from his DNA, and it’s up to you to do the rest. Not an easy task, but if you put in the work now it will pay off in the long run.

Remember a husky is NOT HUMAN! This is the biggest mistake all dog owners make!

To put human standards of reasoning and intelligence on them is not fair, and will not work. Treat them with the compassion and understanding you would give a two-year-old toddler. Learn what a husky is and why he acts like he does.

Do not expect them to think like you do! For if you do, you will be very disappointed.

You cannot expect any dog to suddenly forget thousands of years of DNA because you don’t like it.

You can’t use reasoning like you would a human child. They are DOGS! I can’t stress that enough.

A husky is a unique animal that is also intelligent enough to know how to fit into your family if you guide him properly. It’s up to you to understand this breed, and to work within the limits of their intelligence and your own natural instinct to baby them like your own child.

This leads to discipline problems, and anger and frustration on your part. And the truth of the matter is you are the one who caused it because you tried to make them human. You tried to treat them fair as you would a child. It’s very easy to get caught up in that because me and you love them so much. But you must remain firm.

Be fair, be consistent, and above all be patient. Rome was not built-in a day, and neither will be your husky. A husky is challenging because the normal dog rules don’t apply. He has the capability to question your commands, the intelligence to ignore them, and the biggest loving heart you will ever know. But if you don’t understand the breed, then you are bound to have some problems.

The potential of your new puppy is in your hands. What you get in the end will be a product of your work… or lack of work that first year. It is all up to you as the owner of this empty little being waiting to join your world and family.

As you begin a journey with this amazing dog, don’t forget that “Trials and Tribulations” will join you on your journey, but your Husky will help you if you help him/her. It is a partnership, keep that in mind as you raise them.